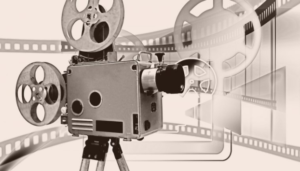 The history of cinema must be studied according to three pillars: its technological evolution, its artistic evolution but also the evolution of its distribution.

Let’s talk first about image projection, a key feature of what cinema will be like in the future. It was during Antiquity that man discovered the camera obscura, the ancestor of cinema. Thanks to a darkened room, the sunlight projects an image on a wall.

The projection of these images becomes a spectacle, an entertaining attraction.

The beginning of the reproduction of the movement

At the beginning of the 18th century, the magic lantern made its appearance. By a light projection process on a painted glass plate, an image animated by successions of plates is projected in front of an audience. Although rudimentary, the movement of the image is starting to catch on.

the same time, the concept of persistence, which is essential to the perception of movement, is born. The thaumatope, the zoospore make their appearances.

The invention of photography

In 1816, nearly 80 years before the first film screening, researcher Nicéphore Niepce managed to capture and reproduce a photograph on a plate covered with silver salt. The capture of reality by reproduction becomes possible. However, his invention seems difficult to date since the first photographs have disappeared.

The dates seem however to tend towards 1816 for its creation and 1827 for its real application.

Pay to see a movie? The kinetoscope

In 1893, the kinetoscope invaded fairs. Through a small hole, the spectator, alone, pays a small coin to spin a sort of wheel projecting an animated image. Often funny or dirty, this invention is somewhere the ancestor of the GIF¯ Note that paying to see represents the very beginnings of the film industry. Reflexions – Kinetoscope

The beginnings of cinematography

Thanks to a remarkable invention similar to the sewing machine that they will call cinematograph, the Lumières brothers manage to capture reality and then project moving images at 16 frames / second! They organized the first public cinematographic screenings of films on December 28, 1895.

In 1896, the Enlightenment undertook a promotional tour to publicize their invention. During this period, they allow multiple people and businesses to use the same technology through a device licensing system. However, until 1903, the cinema was still only an attraction.

were only the experiments of the Lumière brothers with shots such as Arrival of a train at La Ciotat station. It is difficult at this moment to speak of narration or even of cinematographic processes.

The beginnings of cinematography

Thanks to a remarkable invention similar to the sewing machine that they will call cinematograph, the Lumières brothers manage to capture reality and then project moving images at 16 frames / second! They organized the first public cinematographic screenings of films on December 28, 1895.

In 1896, the Enlightenment undertook a promotional tour to publicize their invention. During this period, they allow multiple people and businesses to use the same technology through a device licensing system. However, until 1903, the cinema was still only an attraction.

These were only the experiments of the Lumière brothers with shots such as Arrival of a train at La Ciotat station. It is difficult at this moment to speak of narration or even of cinematographic processes.

The cinematographic tool will, however, allow great advances in the study of movements that the eye alone could not analyze or perceive. Let us think in particular of the work of physiologist Étienne-Jules Marey on “animal movement” thanks to chronophotography.

This knowledge could not be acquired by simple observation, for the most sustained attention, concentrated on the action of a single muscle, has great difficulty in grasping its phases of activity and rest, even in the slowest pace.

How then could one hope to capture the action of all the muscles of the limbs at the same time in all phases of a rapid pace? As an anecdote, his work will allow a definite advance in the representation by painters of the complex movement of horse racing, poorly represented until then.

The first attempts at his image appear thanks to Demeny’s work on the Photonoscope. It is 1892, the convergence of sound and image is advancing. Funny anecdote, Demeny will record the first “I love you” facecam on glass disc.

Remember that “sound” has been around since the beginnings of moving pictures. Performed during the screening by actors and an orchestra, the film was well performed in live music. It is capture to tape and its synchronized replay that takes a step forward.

Birth of silent cinema: in search of language

The first successful film, Le Voyage dans la lune, was created by Georges Méliès in 1902. The cinematographic language is constructed as a narrative art. The rigging, the editing, the story and the actors make their appearances. Since the sound is not yet relevant, Méliès sets up a system of boxes to tell his story.

History of CinemaThe Journey to the Moon

The first cinematic genre, burlesque, was developed in 1908, when cinema was recognized as an art form, thanks to actors such as André Deed and Max Linder. The language of cinema was built little by little, notably thanks to D.W. Griffith between 1908 and 1913.

However, if the cinema develops by copying the narration of the theater in the USA and in France, it will know another use on the Soviet side.

From 1917, after the October Revolution, due to the new cinematographic grammar developed by Soviet filmmakers, including Dziga Vertov and Sergei Eisenstein, the goal of Soviet filmmakers was to use this still avant-garde art in the service communist propaganda.

The magnificence of the Soviet regime must be disseminated to as many people as possible. The cinematographic language becomes experimental and the editing a vector of new energy.

Simultaneously, two other avant-garde orientations were taking shape: Impressionism in France and Expressionism in Germany. The first began in 1916, but gained momentum in 1921 and continued until the late 1920s.

The second movement took off in 1919 with Robert Weine’s Le Cabinet du Dr Caligari. Charlie Chaplin, an emblematic figure of American burlesque, also emerges during this decade as a comic actor in numerous films.

History has retained Charles Chaplin above all as a director, and above all as a legendary comic actor. But, he was preceded by another silent film landmark, American actor Buster Keaton. He plays roles that have made him immortal to American audiences.

We spontaneously think of his first role in Le Mecano de la General, a film in which he plays this hero that we do not expect, frail train conductor who will turn the war upside down thanks to his tricks (and also thanks to chance.

Buster Keaton is almost a hundred films in total, and was one of the first Holywoodian legends, a silent movie star.

After the precursors of silent cinema, let’s take a look at the development of this first form of the 7th art around the world. Thanks to silent cinema, America fell in love with films and Hollywood was born.

Hollywood: the birth of the legendary American cinema studios

The first big Hollywood studios, like Laet (which would become Columbia Pictures) opened their doors in 1918. The following year, Columbia took over the production of films, which gave birth to the great American film industry such as us.

we know it today with its beautiful flashy sets and extravagant films. Another studio, Universal Pictures, was launched in 1912 by Carl Laemmle. He created a style close to that of burlesque with spectacular effects and mythical figures like Frankenstein and Dracula, which he used in his films.

He thus succeeded in creating a new genre of horror in an American tradition which had already seen the works of Edgar Poe adapted on the big screen.

The first talking film, The Jazz Singer, was released in 1927. The transition to sound cinema was not without its difficulties; many big names in the seventh art see their careers decline because they have not been able to adapt.

The appearance of sound brings about the end of silent cinema

But silent cinema disappeared definitively in the 1930s. Rare are the actors who have succeeded in this transition. Indeed, the weight of facial expressions and gestures has considerably diminished to tend towards a more natural game where voice and intonations now have considerable importance.

Charles Chaplin is the best example. The birth of talking films ushered in a new type of French cinema known as poetic realism. The golden age of French cinema is marked by the works of Jean Renoir and Jean Gabin, according to critics.

At the same time, the US distribution network continues to expand, eventually becoming and remaining part of the global film industry. Thus, everything that is produced in Hollywood inevitably reaches Europe in the 1930s. French audiences know American stars as well as French actors.

The United States understood the economic weight that the cinema industry could represent, at the same time as the cultural asset (soft power) that this art could represent to disseminate their art of living and their way of thinking.

The Next Big Thing in Salsa Music Concept